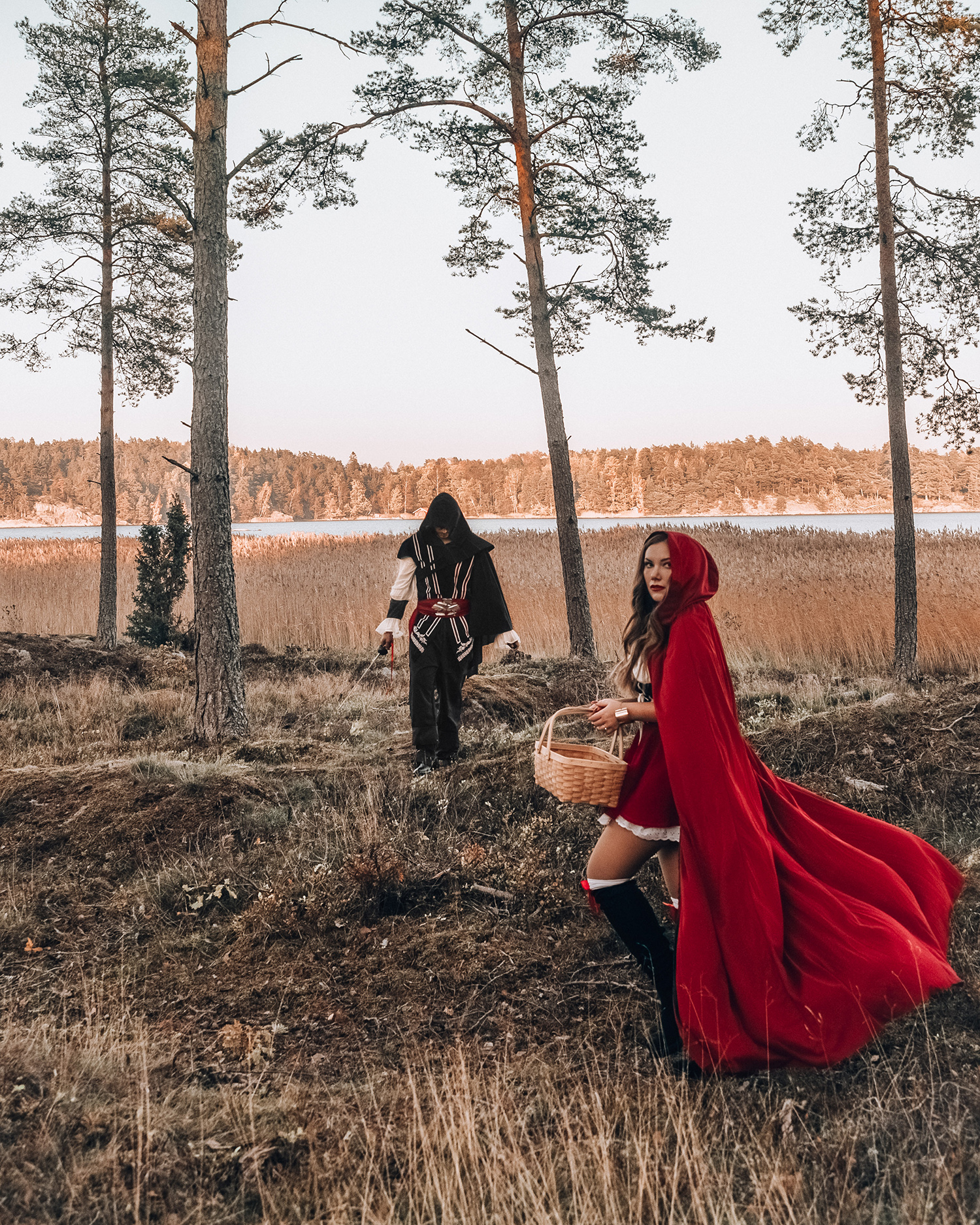 Last year we published a massive guide with 100+ couple costume ideas. This year we've picked out fewer favorites. But we've chosen costumes that we think would look great on camera. These are Instagram-worthy costumes that require little-to-no effort.

We are also a big fan of costumes that you might be able to reuse. The Red Riding Hood cape would look just as dazzling if you're standing in the highlands in Scotland as it would on your Halloween party. And the Opposuits can easily be dressed up and down for everyday use.

Last year, Simon and I partied like vampires one night and like pirates another. This year our costumes have nothing in common except that it is our personal favorites (and both costumes comes with a hood).

It feels like I've always wanted to have a long red cape with hood, so dressing up as Red Riding Hood just felt right. Simon, on the other hand, wanted to become his favorite gaming character, Ezio from Assassin's Creed. You can find so many costume variations for these well-known characters and we think most of them look pretty awesome.

*Our Halloween costumes are from the Swedish store Partykungen.se (they ship to the nordic countries). But, if you scroll down you can find the links to these costumes on Amazon.

Which costume is your favorite? 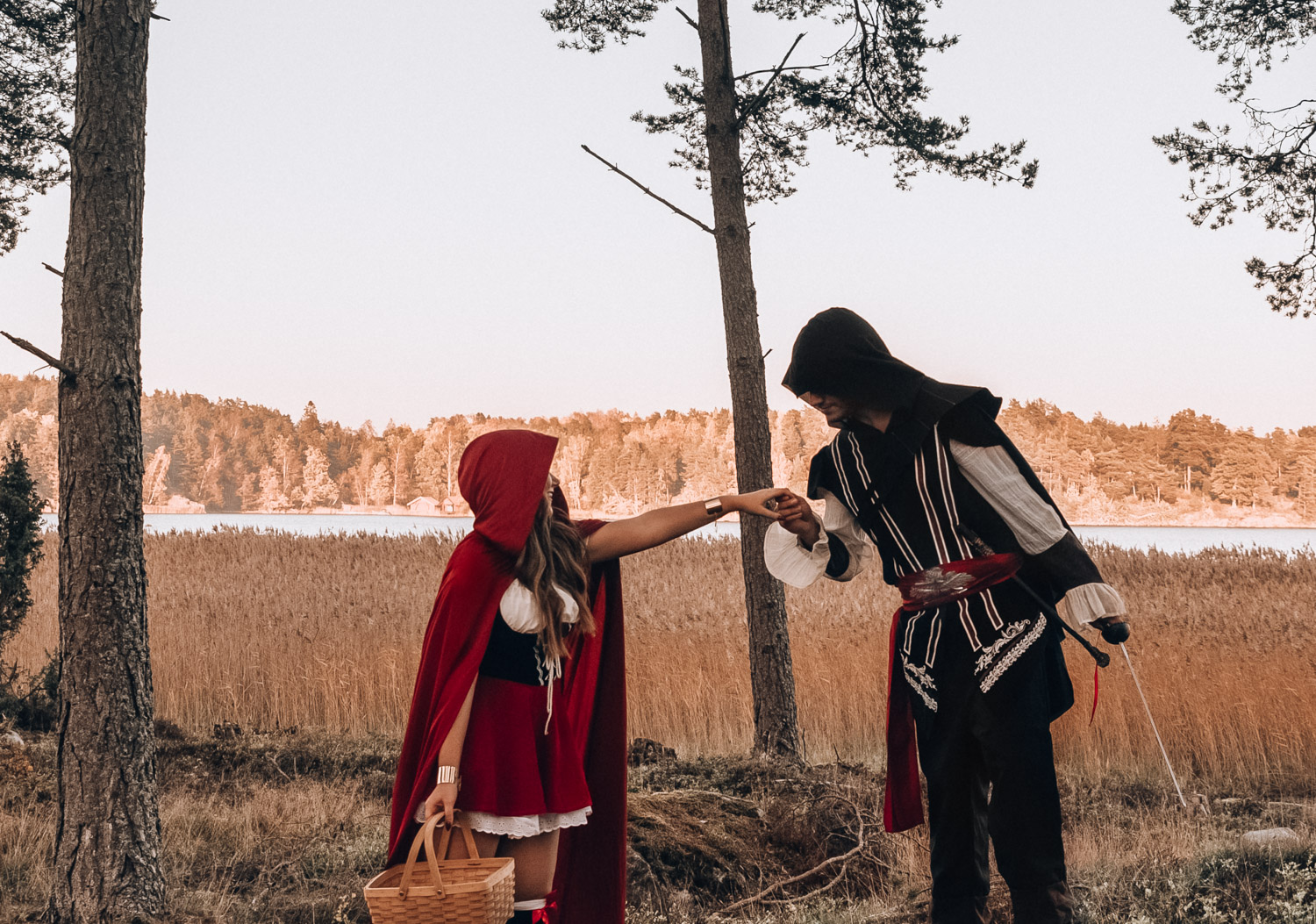 Modified date: January 27, 2019
Previous article25 Things to Do in Slavonia, Croatia
Next articleA Weekend in Bath, England: A 48-Hour Itinerary

Ida Josefin Erikssonhttps://adaras.se
Ida Josefin Eriksson is an award-winning blogger and photographer from the north of Sweden. After graduating with a bachelor’s degree in journalism, she started her own business to pursue her dreams and become a world traveler and digital nomad.

The 31 Best Yellow Dresses to Wear This Summer

To make a bright statement, look no further. Here are our favorite sunny yellow dresses to wear this summer!
Read more

23 Awesome Things to Do at Home During Quarantine

Tired of binge-watching Netflix or just bored out of your mind during COVID-19 isolation? We have compiled a list of 20+ awesome things to do at home while social distancing!

Add a taste of sunshine to your breakfast. This uplifting and vegan tropical smoothie bowl brings the Hawaiian vibes to you with its refreshing flavors of pineapple, mango, and coconuts.

Working from Home: 7 Common Challenges & How to Overcome Them

A blessing or a curse? Working from home doesn't come without its challenges. The flexibility is the best, but you might have a hard time staying focused, disciplined, and productive. Or maybe you feel isolated? Here's how to overcome these common issues.

The Most Instagrammable Places in Cornwall, UK

With a glorious coastline, miles of sandy beaches, tropical gardens, castle ruins, and pretty seaside villages it's easy to find Instagrammable places in Cornwall - wherever you look. Discover some of the best!

17 Things to Do in Antwerp, Belgium

Diamonds, fashion, design, art, world-class food, and one of the prettiest train stations on the planet. Discover top attractions, hidden gems, and some of the best things to do in Antwerp in this travel guide.