Cascais: Holiday like a Royal on the Portuguese Riviera 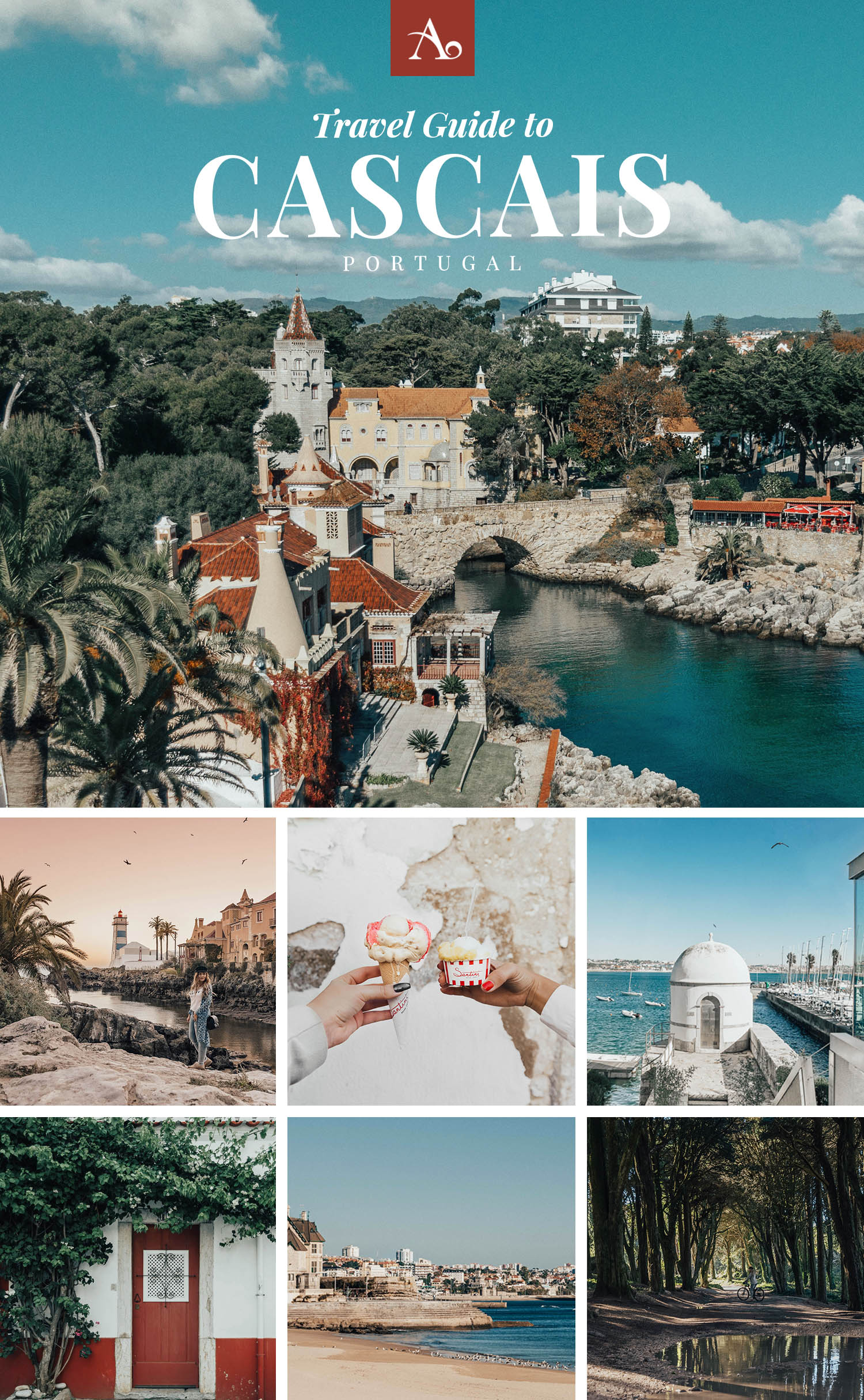 Discover Portugal's royal hideaway and a true gem on the Portuguese Riviera. Cascais is a seaside perfection with charming mosaic sidewalks, amazing food and wine, fantastic scenery and golden beaches. Find out what to do, what to see and where to eat here in my Cascais travel guide.

Even though Cascais (pronounced k-eh-s-K-AY-s) is located only about 30 minutes from Lisbon, this is an often overlooked destination. Which is also the perfect reason to visit Cascais now (before the rest of the world catches on).

If I mention the French Riviera or Italian Riviera you probably immediately think of glamorous film stars, sophisticated beach clubs, and luxury yachting. But what about the Estoril coast, aka the Portuguese Riviera? It may not be as famous, but it's just as chic – and probably even more relaxing.

Ever since King Luis went for a dip here in 1870, Cascais has been known as a summer retreat for royalty, nobles, and aristocrats. Even today there is a good chance you might walk by holidaying royals and celebrities in this much-loved coastal resort. When I visited Cascais in November, a little bird told me that Portugal's president was staying nearby.

With its beautiful surroundings, sun-soaked beaches, fantastic food, lovely markets, and welcoming people Cascais is a great place for a classy and relaxing vacation. And did I mention? There are over 300 days of sun per year!

Cascais is located only 20 kilometers from Lisbon and its international airport. With a 30-40-minute train ride, you can be pretty much in the center of the town. It's cheap too! A single ticket for adults is only €2.20 from Lisbon to Cascais, and the return ticket is €4.40.

WHAT TO DO IN CASCAIS, PORTUGAL

It's probably impossible to go to Cascais without relaxing. As a matter of fact, Cascais is famous for the sea, the sun, and the slow life. And the slow life is just what you need sometimes.

Feel free to do nothing at all. Dine for hours, stroll along the beach and take in the beautiful coastline views. Or do some people-watching in a cozy cafe in the old town. This is the perfect place to enjoy a peaceful and lovely vacation, a weekend break or even a day trip – with no stress.

Stroll Through the Charming Old Town 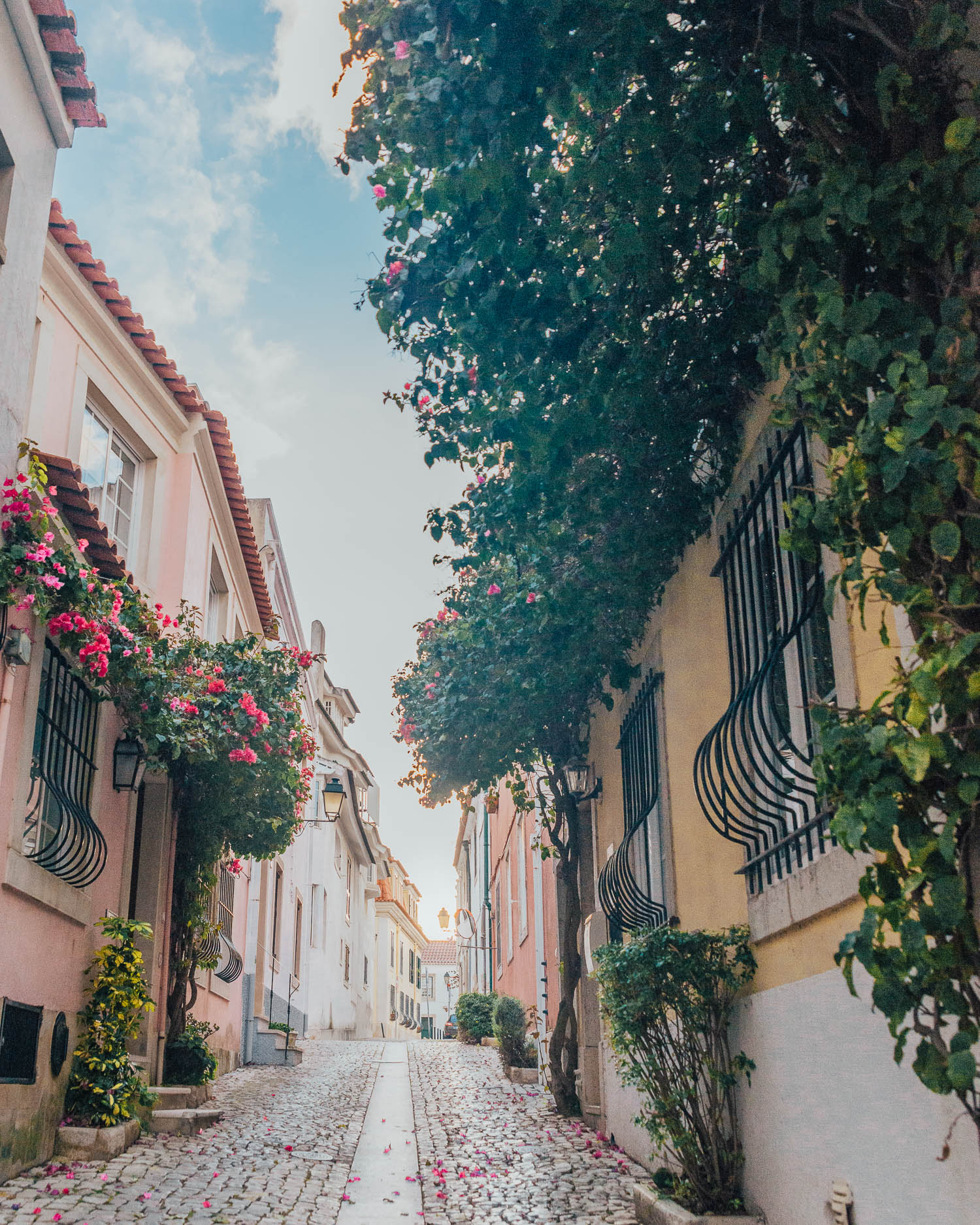 How charming can a street be? The Old town, with its winding laneways is a place to get wonderfully lost in. The whole Old Town center in Casais is picture perfection. Pastel-colored and white-washed facades frame the cobblestone streets. There are many colored doors and vibrant flowers dripping out of window boxes. It's so pretty!

If you are a photographer or a blogger, you will have a hard time leaving The Old Town. There are so many photo-friendly and Instagram-worthy places here.

Read also: 12 Unexpected Things to Do in Paris

Go to the Beach

The beaches in Cascais and the surrounding area said to be amongst the best in Portugal. And it's easy to understand why. I was in Cascais in November and found the stretches of golden sand and dazzling azure water incredibly inviting. Even though it would be way too cold for a swim and the otherwise crowded beaches were empty of people.

I would say it's a must to go to the beach no matter what time of year you visit Cascais. And the beaches then! There are beaches for everyone. Two of the main beaches are called Praia da Conceição and Praia da Duquesa and are close to the city center and train station.

A short walk from them, near the Old Town, is also the beautiful The Praia da Rainha (Queens Beach) which was the private beach of Queen Amélia during the 1880s. Situated between rocky outcrops, this is a secluded and very scenic beach. Though, during the summer season, you can count on it being crowded.

There are also family-friendly beaches and beaches for adventure-seekers. The wild, dramatic and rugged beach Praia do Guincho, for example, is voted as one of best surfing beaches of the Lisbon region. A fun fact is that this beach was used in the opening sequence of the Bond film On Her Majesty's Secret Service.

The most iconic building in Cascais and a must-see is the Santa Marta Lighthouse. Built in 1868, this blue and white striped tower stands at 8 meters (25ft) tall and is both a museum and a working lighthouse. Climb the stairs to the top and enjoy the lovely view over the village.

You can also check out the museum and learn more about Portuguese lighthouses and the work of the lighthouse keeper. 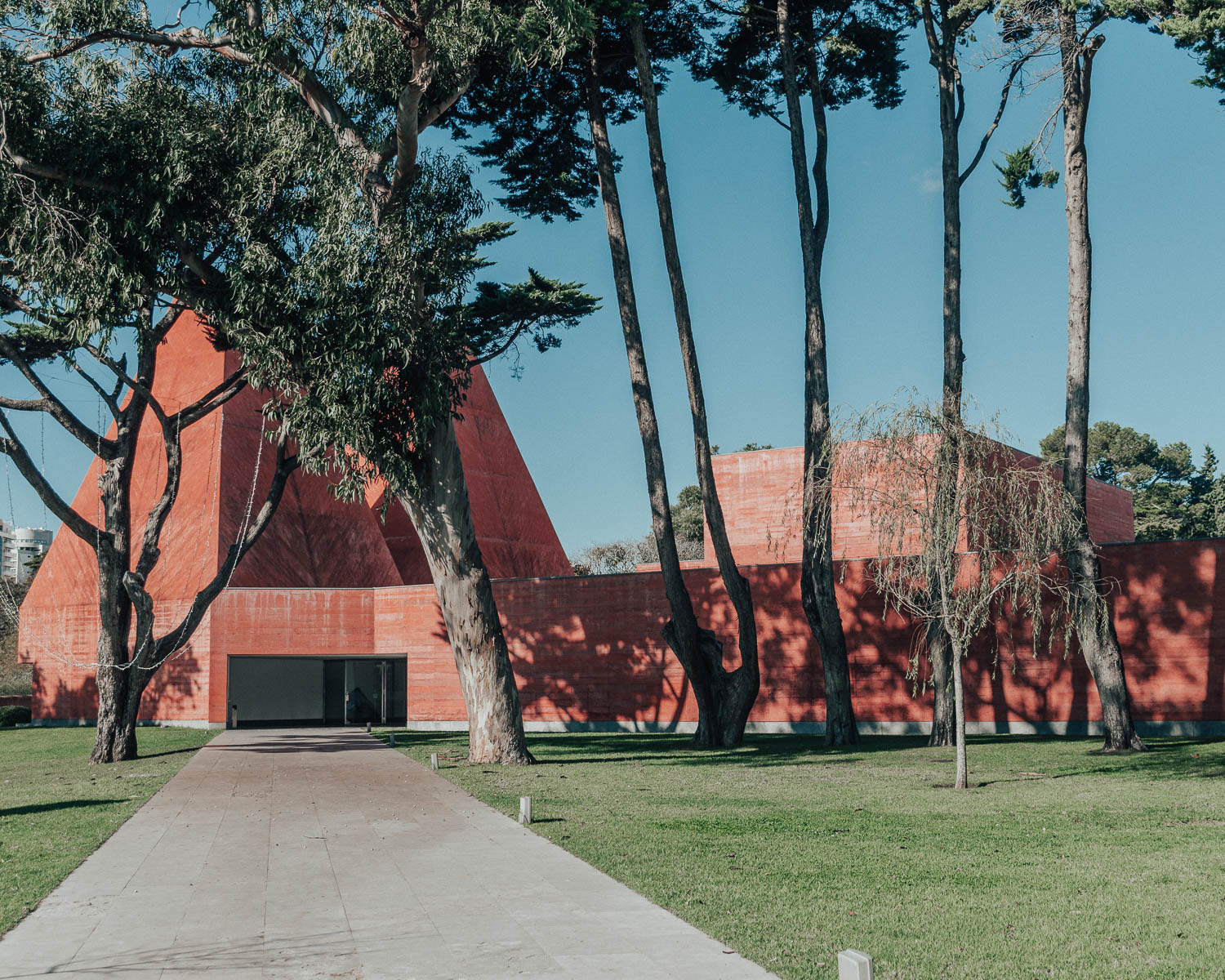 Just a short stroll from The Lighthouse Museum is another very cool museum, called Casa das Histórias or Paula Rego Museum. The museum was established in 2009 and holds numerous artworks created by Paula Rego.

I didn't step inside, but I think the building itself is worth seeing. The two pyramid-shaped towers in red-colored concrete have, just like the Lighthouse, become an iconic landmark in Cascais. The architect who designed it, Eduard Souto de Moura, won the Pritzker (an architectural Nobel award) 2011.

Click here for more attractions, tickets, and tours in Cascais

So rugged, dramatic and lovely! Apart from the beaches, the coastline views in Cascais are to die for. I could easily spend hours just by the water. If I lived here, you would probably find me watching the sunset every single day and dramatic storms by night.

Go for a walk before the sun goes down and enjoy the views. The picture to the left was taken on a bike stop close by Guincho Beach, and the picture to the right is taken just by the road as I was on my way to Boca do Inferno.

Marvel at Boca do Inferno

“The Hell's Mouth,” Boca do Inferno, is a thing not to be missed in Cascais. This popular tourist site is a scenic cliff formation where the waves of the Atlantic Ocean roughly crashes against the cliff face and forces its way into the mouth of the cave.

The hastily taken picture above does not make it justice. I was going to take pictures here during sunset but never made it (as I ended up stopping on a gorgeous spot I found by the road). But you have to see Boca do Inferno for yourself. I could only imagine how gorgeous and dramatic this sight must be when the wind picks up. It's also a great sunset spot.

The Boca do Inferno lies 2 km to the west of Cascais and is a popular walk from the town center. 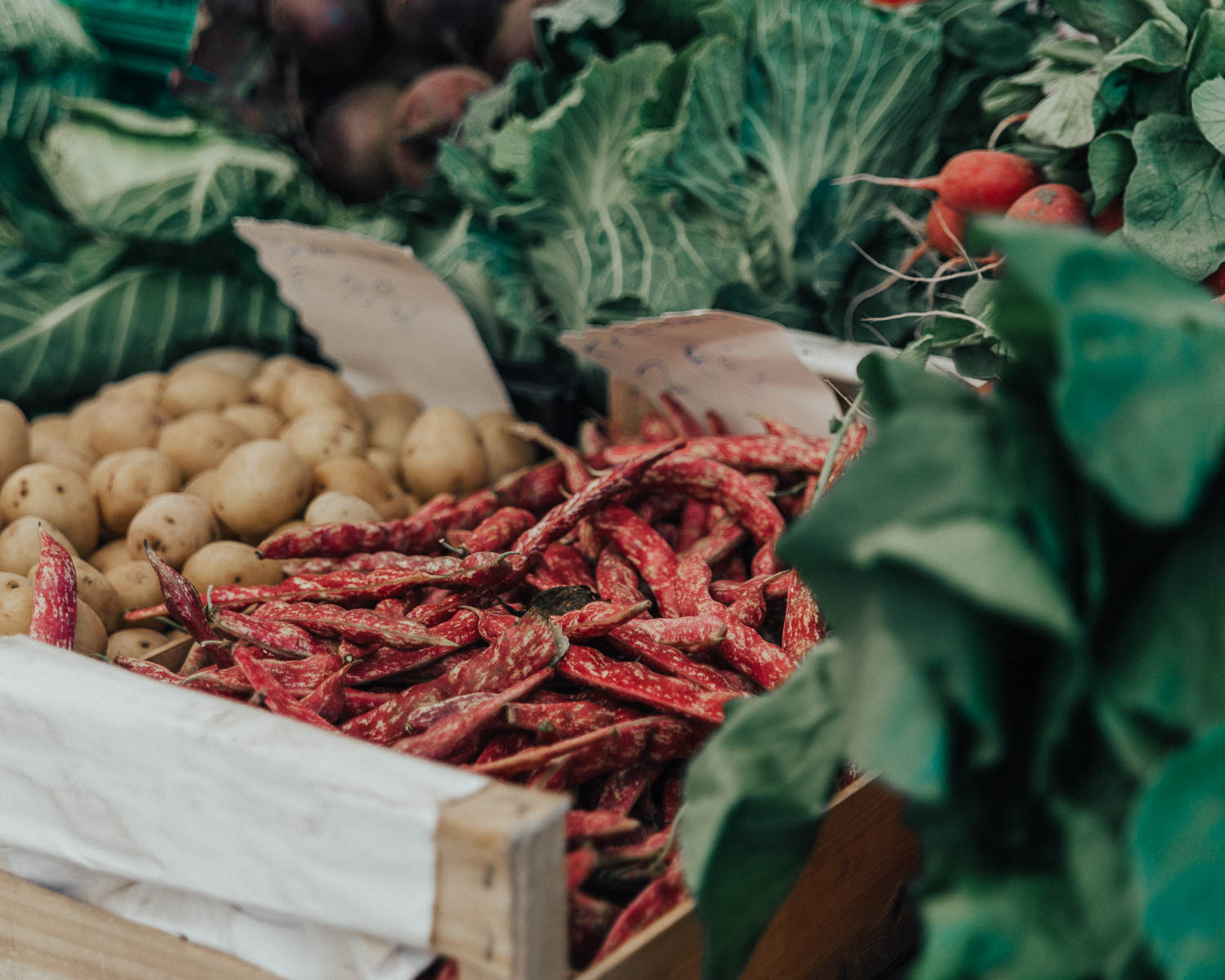